Not the final word on 12 Avenue Underground in Victoria Park

On June 21, City administration will be making a final recommendation on the alignment for the first phase of the Green Line LRT, including the portion through the Beltline. Their recommendation includes an underground alignment along 12 Avenue from 2 Street SW to Macleod Trail. East of Macleod, the alignment transitions to private lands and surfaces further east along the south side of the CPR tracks. Stations would be located underground near Centre Street and on the surface at 4 Street SE.

The BNA fully supports the 12 Avenue underground alignment and station between 2 Street SW and Macleod Trail. This has been an important part of making the Green Line LRT accessible to Beltline residents and businesses, while minimizing impacts to our dense transportation network used by cars, buses, people walking and cycling.

The BNA recognizes the need for the City to finalize an alignment so that it can be submitted to the provincial and federal governments for funding and so that the important work on the Green Line LRT can move forward. We would like to thank City administration and Councillor Woolley for their great efforts to find the best solution for the communities of Beltline, Victoria Park and Ramsay. 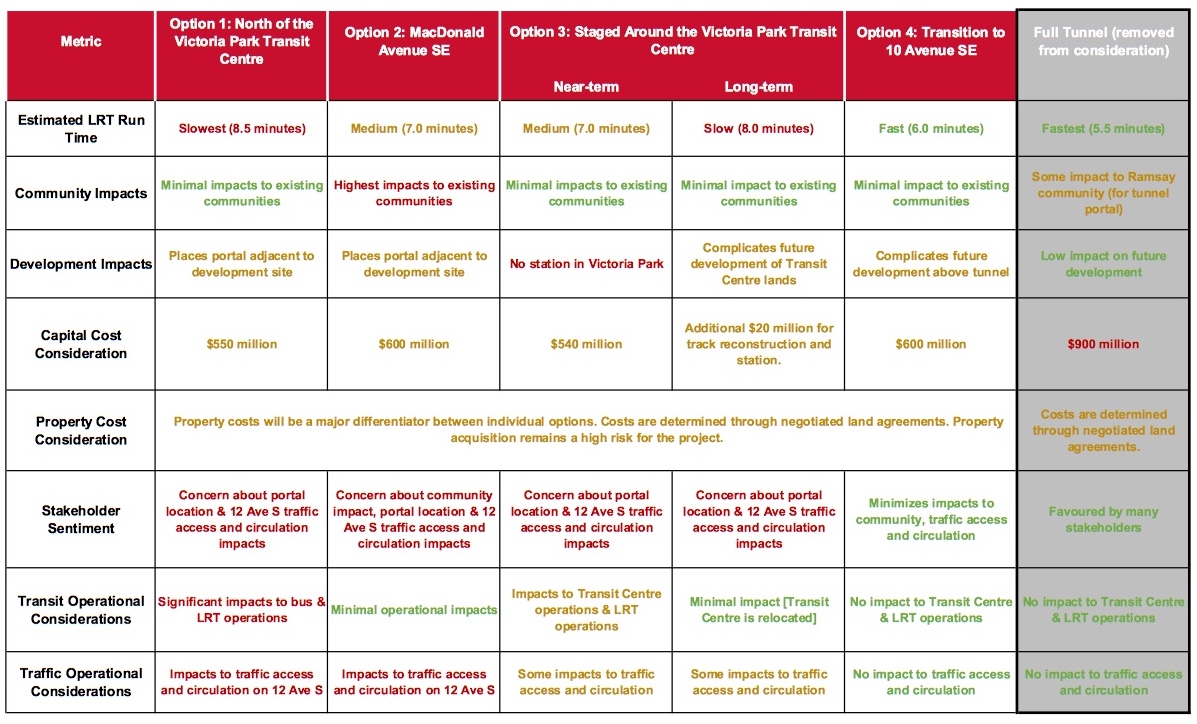 The table above indicates the four Beltline alignment options that are still in consideration going into the committee meeting on June 21. While these four options have similar estimated capital costs, there remain some important questions with respect to Administration's recommended Transition to 10 Avenue alignment for Victoria Park East:

Administration even stated that of the four options:

“Property costs will be a major differentiator between individual options. Costs are determined through negotiated land agreements.”

In spite of this, property acquisition cost estimates have not been included as part of the evaluation.

Will the City reevaluate this option once capital costs are known?

This information has not been included as part of the City’s evaluation but would ultimately impact the long term price tag of this option.

Will the City reevaluate this option to include lost tax revenues due to reduced developability on impacted lands?

This option was the most supported by local stakeholders including the BNA but has never been officially recognized by the City as an option for consideration.

The BNA believes this option would encourage higher transit ridership and reduce traffic congestion Downtown by better serving the high volume of visitors to the Stampede, the arena and the expanded BMO Convention Centre as well as the surrounding communities. Read more about the opportunities of this option here. 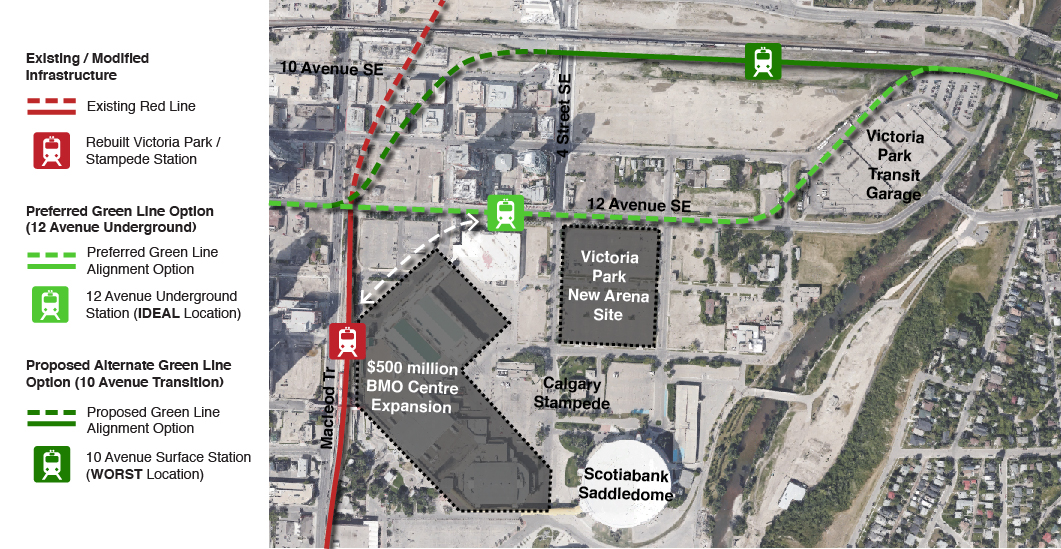 The latest presentation by City administration only makes mention of a much longer “full tunnel” option that goes all the way under the Elbow River to Ramsay. This scenario obviously carries with it much higher cost implications than the tunnel option for which BNA has been advocating.

Victoria Park and Stampede are soon to undergo massive transformations, however, many of the details are still to be determined. The BNA will continue to advocate for the Beltline and the best interest of the City of Calgary to reevaluate the Transition to 10 Avenue alignment in terms of its cost and it’s ability to best serve the needs of Calgarians. We will also continue to advocate that the Preferred 12 Avenue Underground Alignment in Victoria Park be given fair consideration as more information on the future of Victoria Park and Stampede becomes available in 2018.