About the Beltline Neighbourhoods Association 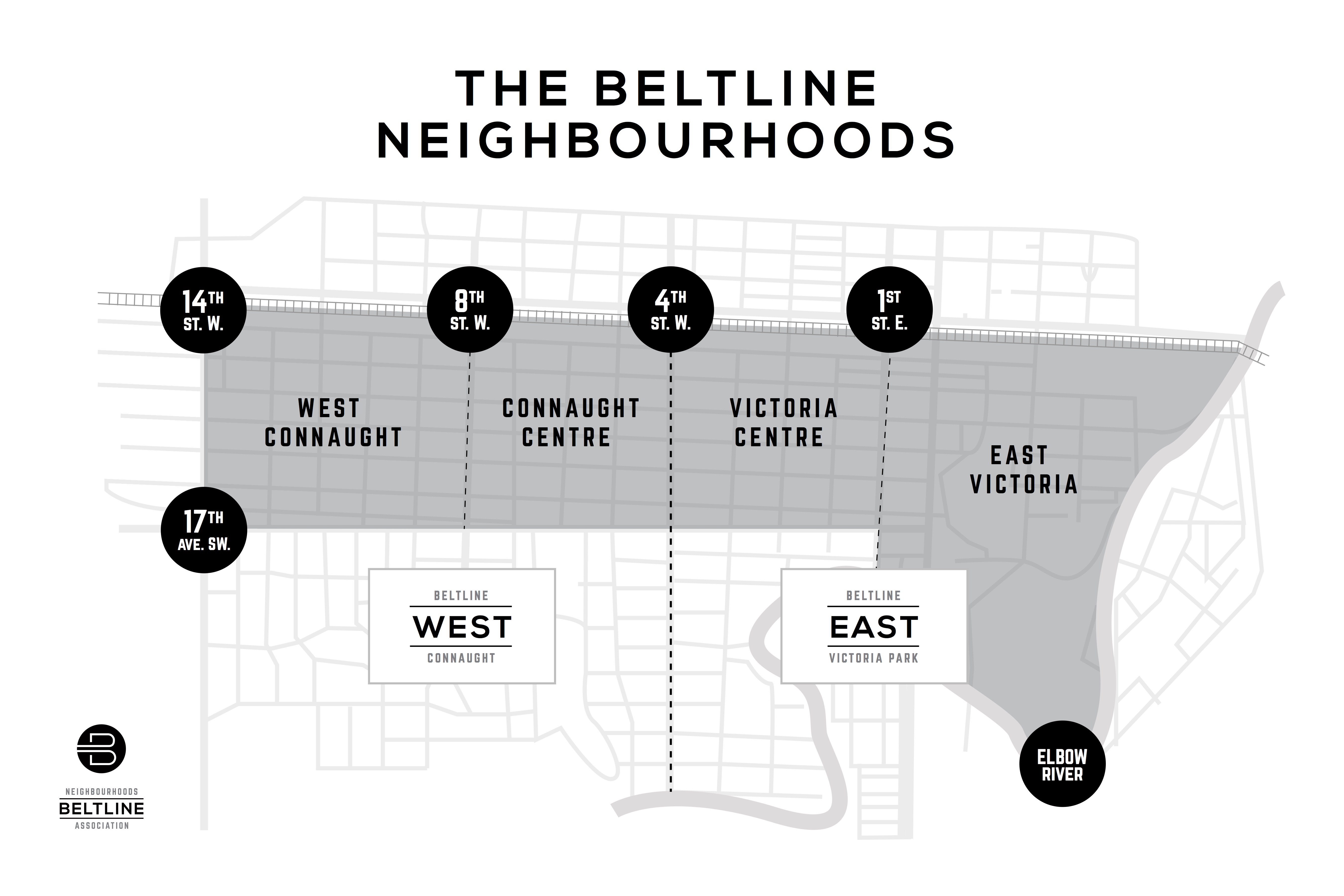 We are proud to be a recognized member of the Federation of Calgary Communities  along with over 200 other community associations and non-profit organizations in Calgary and are officially registered with the Alberta Government.

The Beltline Neighbourhoods Association is a grassroots organization founded by engaged residents with a history of service in their communities who wanted to build an accessible and diverse association open to all residents to get involved in making the Beltline an even better place.

The objectives of the Beltline Neighbourhoods Association are to:

Why do we need the Beltline Neighbourhoods Association?

We believe that the Beltline has the best neighbourhoods in Calgary and want to empower its residents and businesses to make them even better. By engaging the residents and businesses that call Beltline their home, we can harness the talents and energy of this incredibly diverse community to build a strong cultural, economic and social foundation.

It’s a critical time for the Beltline residents and businesses to play a role in shaping the future of the Beltline district in Calgary:

The Beltline needs an organization to advocate on behalf of its residents and businesses on these projects and many others to ensure the best outcomes for our neighbourhoods.

How is the Beltline Neighbourhoods Association Governed?

The Beltline Neighbourhoods Association is dedicated to an open governance model as promoted by the Federation of Calgary Communities to ensure all residents can play a role in improving their neighbourhoods. We prioritize respecting a diversity of voices and strive to have a wide variety of people from different backgrounds and with different experiences on our leadership team. Our Board of Directors is elected at an open AGM.

Who is the Beltline Neighbourhoods Association?

The Beltline Neighbourhoods Association was founded by engaged Beltline residents with a history of service in their communities who wanted to build an accessible and diverse association open to all residents to get involved in making the Beltline an even better place.

The Beltline Neighbourhoods Association continues to grow and is made up of a expanding list of members and volunteers.

Ilyas is a volunteer, lawyer, and proud Beltlandian. A born and raised Calgarian, he grew up spending his evenings at the Calgary Public Library and exploring the city on Calgary Transit. He is now the go-to source for scoops on local experiences amongst his friends and regularly gives bicycle tours of the city. Outside of the office, Ilyas is passionate about community building and bringing people together. He has founded and led a number of grassroots initiatives to encourage civic engagement, especially amongst young people and in Calgary's diverse Muslim community.

Born and raised Calgarian, Natalie is a longtime resident of the Beltline. She enjoys knitting socks (check out her Instagram account at @nat.sit) and using her cargo bike to carry fun things like her daughter, a Christmas tree, or 150 cans of beer—although not at the same time. Natalie is a technical writer with a local educational technology company.

Anne moved to Calgary from Vancouver in 2014. At the time she and her husband bought a Beltine condo to be close to Anne’s work, but over the years they discovered all the amazing things that the Beltine has to offer. She loves biking and blading on The Cyclepath and is an avid user of the Barb Scott Park ice rink in the winter. In 2017 Anne initiated a mom’s meetup group in the downtown and surrounding communities; although it was short-lived, it was exciting to connect with other young families that enjoy living in the city core. Through BNA she sees opportunities to engage our residents in multiple ways. Anne is an event planner and currently works in elections.

Randy is a born and raised Calgarian and has called the Beltline home for four years. He is currently a CPA (Chartered Professional Accountant) Candidate and works as a Financial Analyst in the energy industry. With an undergraduate degree in Kinesiology, he is passionate about active living and community building. He is a supporter of getting out and exploring the neighbourhood by foot, bike, or e-scooter or any mode that promotes engagement between community and business members. He is excited to bring his accounting skill set to the Beltline Neighbourhoods Association.

Tyson has been a resident of urban Calgary ever since returning to the city in 2008 following a four-year stint in Vancouver. As a registered architect, Tyson is passionate about city building, and has taken a particular interest in the intersection of infrastructure, buildings and landscape. He has had an opportunity to participate on a number of important inner city projects such as the West LRT Blue Line extension, the 7th Avenue refurbishment and several office and mixed-use developments. Over the course of his four years living in the the Beltline, Tyson has been actively engaged in the community with an interest in planning, development and policy issues. As a founding member of the BNA, he hopes to continue with this role and help the Beltline realize its potential as one of Calgary’s best places to live, work and play.

I have been a resident of the Beltline for 6 years and a part of the BNA (and the associated Beltline Urban Development Committee) for 2+ years. Professionally, I am an architect and I have always been interested in the way a city develops and the role people and community play in that. I love living in the Beltline and am enjoying watching it grow into the community it’s becoming! I feel that Calgary and the Beltline are in a transitional period where more people are seeing the value in making the inner city their home and community for the long term. I value the opportunity to get involved and engage people in the community by communicating what’s happening; whether that is a new mixed-use development or a social gathering!

I have been a resident of the Beltline since moving to Calgary 12 years ago. My wife and I have a for year old daughter, and this neighbourhood has what our family needs to grow here. The increase in density, community art, social events, and improvements to transportation have grown my sense of community. It's exciting to share in what the BNA is doing, contributing what I can to making this a community.

Geoff is a retiree and part-time consultant in the health & environment area who loves downtown life, and is a strong advocate for inner-city living. A resident of Erlton from 2000-2016, his home was flooded twice in that period; he moved to East Victoria Park in 2016 in part to avoid being flooded again but also to be even closer to inner-city living and the Stampede. He is highly supportive of community associations: he was active in Erlton community Association as a Director, with responsibility for flood-associated issues, and sat on their Planning Committee. Today, he is a member of the BNA’s Planning Committee where he strongly supports responsible development at the eastern end of the Beltline, and continues to advocate for additional flood protection against the likely occurrence of another flood in Calgary.

Tamara is a professional Landscape Architect and long-time resident of Beltline. She believes that we are all impacted by our environment and our community – so why not get involved! Tamara has been volunteering for the Beltline community since 2013 and is also a member of Calgary’s Public Art Board. You can always find Tamara out and about in the community enjoying the many opportunities for entertainment and dining out that make our community so special. If you manage to spot her on a hot sunny afternoon – have a drink with her and talk about the neighbourhood.

Juan arrived at the Beltline –and Canada– late in 2021. He's a communications strategist and project manager. He loves the Beltline's walkability, its closeness to the rivers, public art, and its many festivals. In México, his homeland, he worked on several projects to facilitate the public's participation, engagement, and consultation in government projects and affairs. As Director of Communications in the Beltline Neighbourhoods Association, he's looking forward to helping more beltlandiands be heard and have a voice in the city's decision making process.

Michael has lived in the Beltline ever since moving to Calgary in 2016, loving its diversity, walkability, and access to amenities. As an urban planner, both his professional and personal interests have centered around improving access to recreation and community services while creating vibrant and healthy communities where people feel safe and comfortable to walk, roll, cycle, drive, or take public transit.

A longtime resident of Calgary’s Beltline, Peter has been at the vanguard of change bringing better representation to Calgary’s urban neighbourhoods. As a founding member, Peter served as President of the BNA 2016-2022 helping lead the development of the McHugh House Community & Arts Hub, The Beltlandian Neighbourhood Zine, Beltline Bonspiel, BUMP Festival, High Park and a broad range of community advocacy initiatives. Listen for Peter's community show, The Palgary Almanac, on alternating Thursday mornings from 7AM - 10AM on CJSW 90.9FM and podcast on iTunes.