11 Street SW is a vital link between the Beltline and Downtown West for people accessing parks, grocery stores, restaurants, shops, homes, and offices. But the at-grade CPR train crossing has long made this link both unreliable and unsafe, especially for those walking and wheeling.

The City of Calgary conducted public engagement in April 2021 and August 2021 with public multiple options presented. The Active Modes plan for the 11th Street Underpass was the highest ranked option by the public and is the recommended plan from the City of Calgary.

The Beltline Neighbourhoods Association strongly supports this plan. Here are 11 reasons why the recommended plan for the 11 Street SW will be a huge boost for the Beltline and Downtown West. 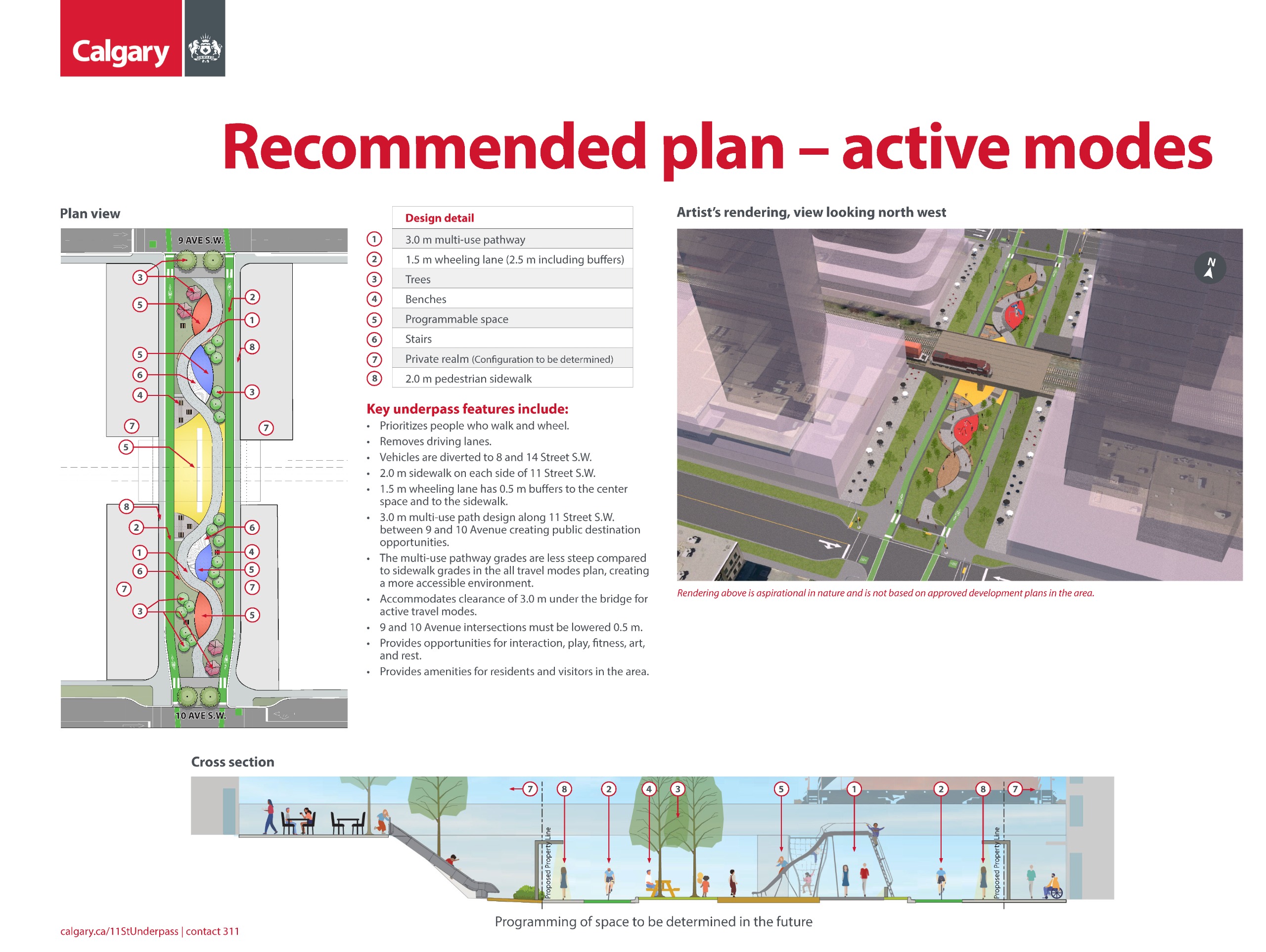 REASON #1: No more waiting for the train!

For years, residents have been caught waiting long periods for freight trains to pass at this crossing. According to the City of Calgary, over 5,000 pedestrians per day make this crossing and are affected by these unpredictable delays. The new 11 Street SW underpass will make waiting to cross the train tracks in the Centre City finally a thing of the past! 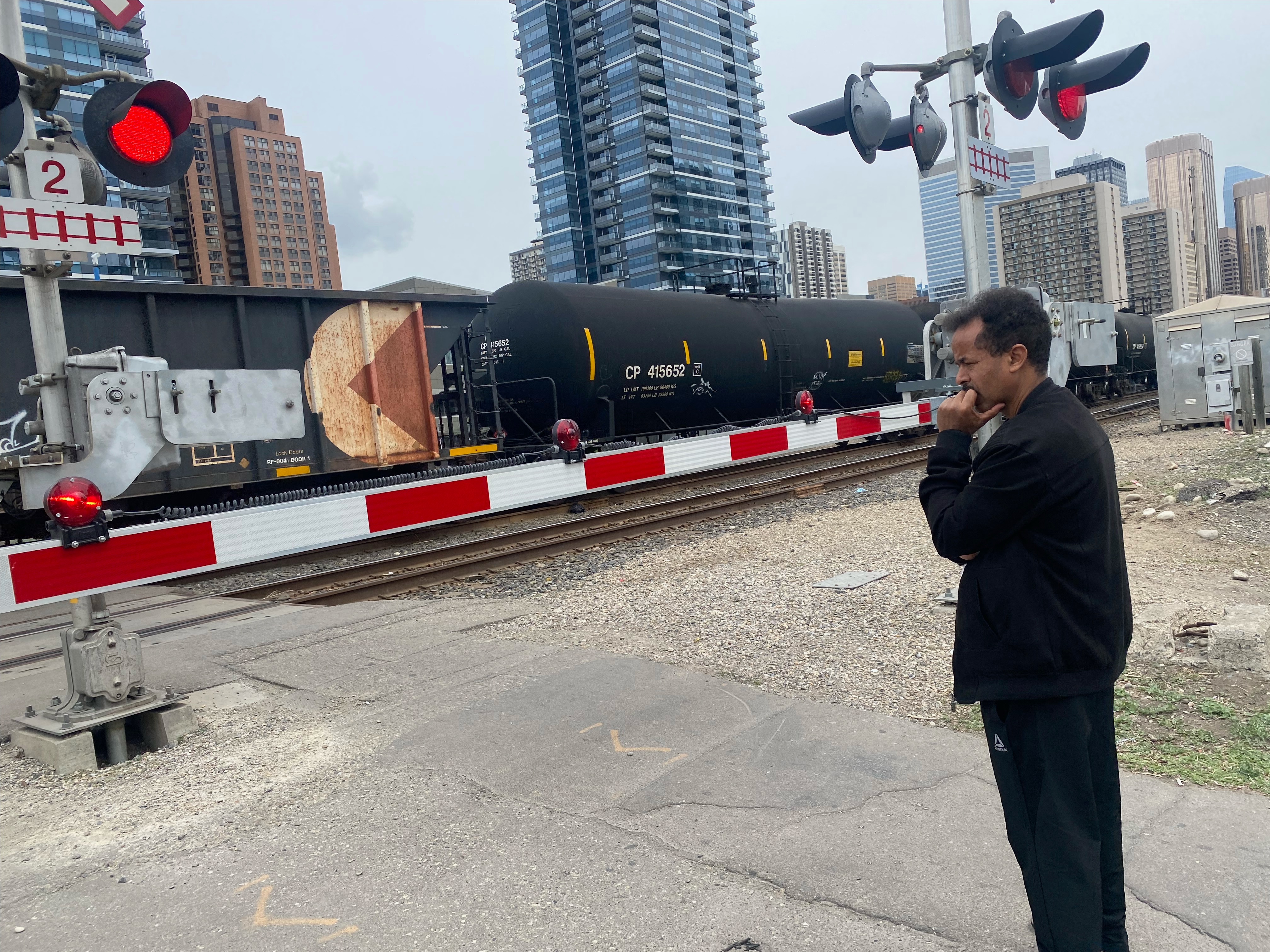 For people taking transit, the 11 Street underpass will provide reliable connectivity for the thousands of residents and businesses in Beltline West (Connaught) to the 7th Ave LRT line at the Downtown West - Kerby Station. 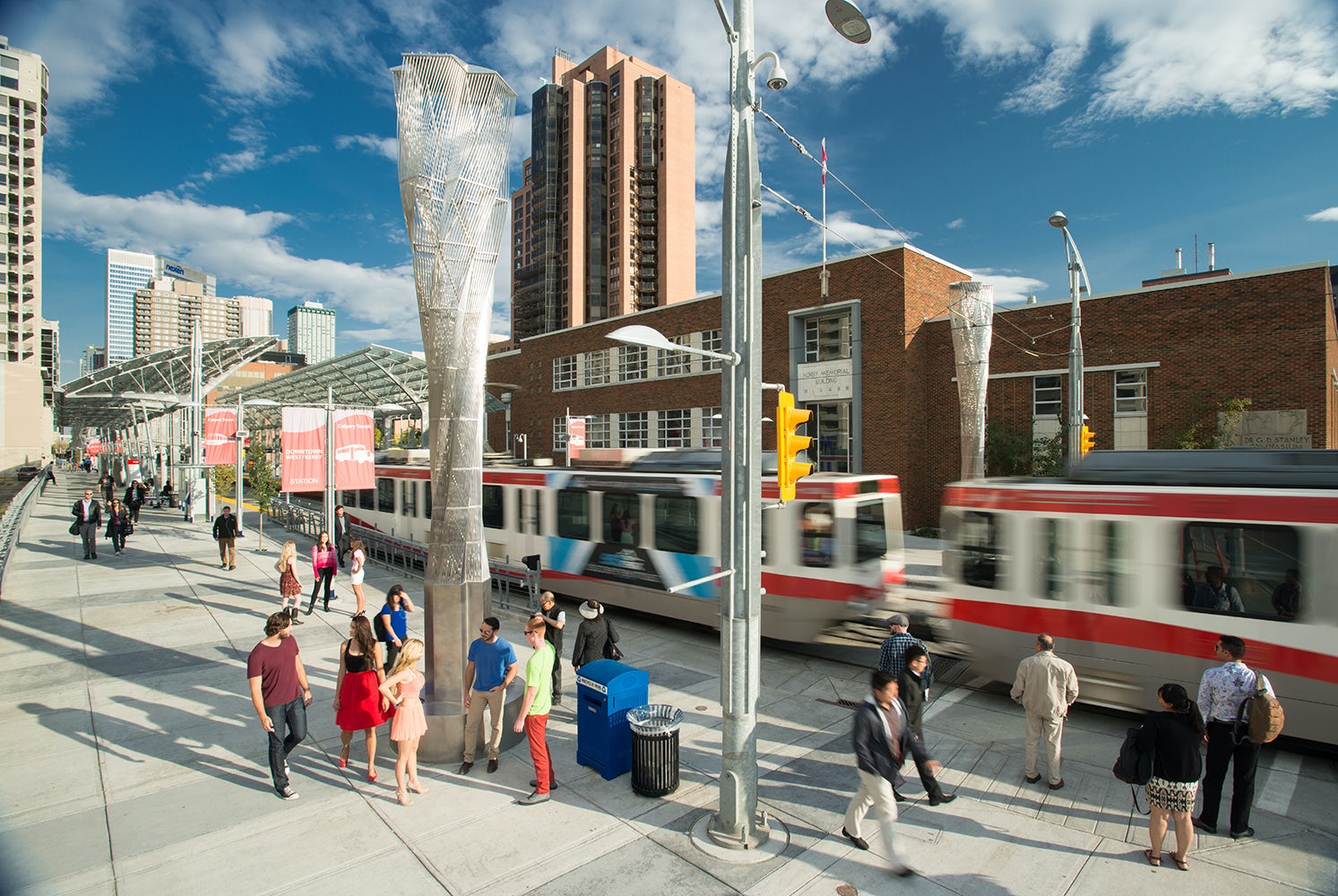 The recommended active modes plan for the 11 Street underpass will provide safe space for users of all levels and ages to ride comfortably between Downtown West and the Beltline. The underpass would connect to the brand new 11 Street protected cycle track in the Beltline and help towards protected cycle tracks to the Bow River pathway to the north. 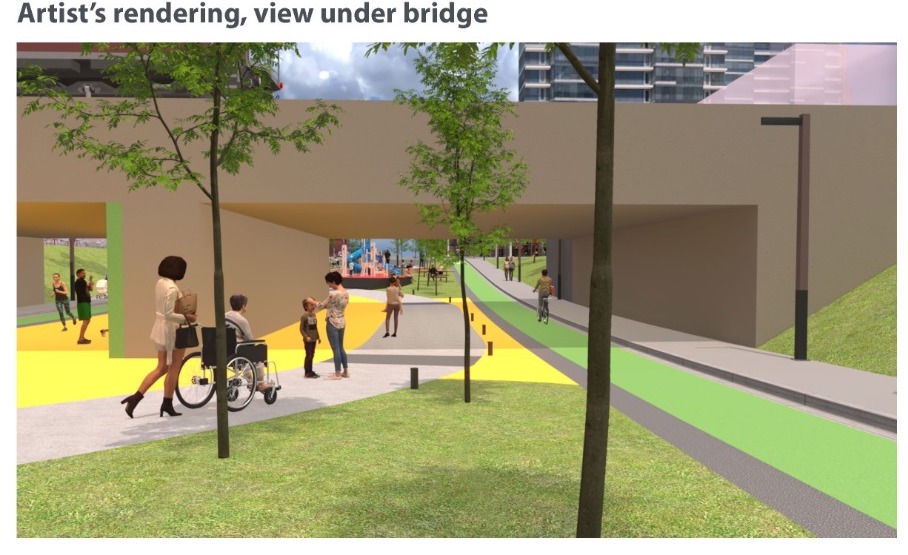 Downtown West has been a food desert without any grocery stores. The current at-grade train crossing makes walking to the grocery store inconvenient and unpredictable. However, the active modes crossing will make it easier, safer, and much more enjoyable to walk or bike to the many great grocery stores across the tracks in the Beltline.

REASON #5: Much needed park space for the Beltline and Downtown West residents

According to the City of Calgary’s own guidelines, the Beltline has only a third of the recommended park space measure of both population and land area. The recommended 11 Street active modes underpass plan will make creative use of public space to double this connection as a public park space to play and to gather. 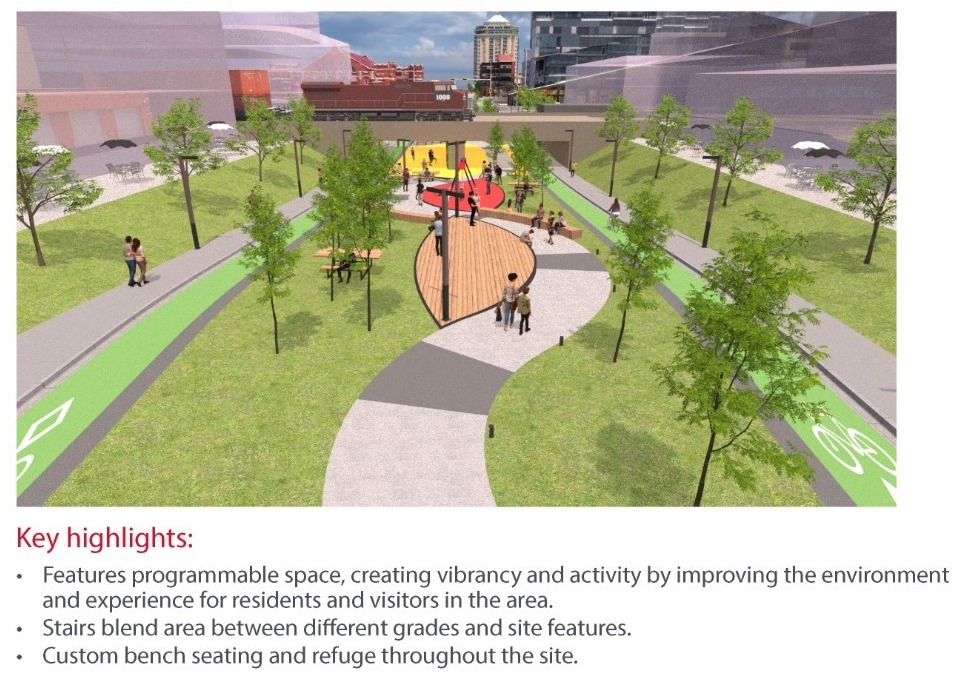 REASON #6: Will help revitalize the Downtown

One of the biggest challenges today for the City of Calgary is revitalizing our Downtown from an underutilized office core with +30% vacancy to a more mixed-use, neighbourhood with more residents and vibrancy seven days a week. The City has invested heavily in a Downtown Strategy to address this problem. The recommended active modes plan for the 11 Street underpass aligns with the Downtown Strategy and will improve the quality of life for residents and make living in Downtown West and the Beltline much more desirable. 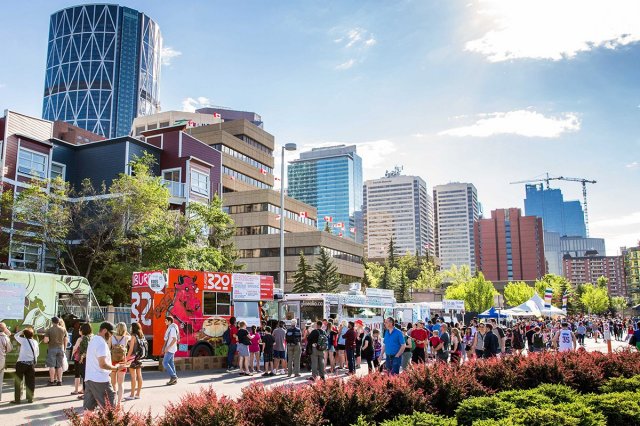 Compared to the nearest rail underpasses at 8 Street and 14 Street SW, 11 Street today handles only a small fraction of the car traffic crossing the CPR tracks Downtown. According to a traffic analysis by the City of Calgary, closing 11 Street to car traffic between 10th Avenue and 9th Avenue SW will actually improve vehicle traffic flow on these avenues. By turning the intersections at 11 Street and 9th Avenue and 10 Avenue into T-intersections more overall green light time can be alloted to moving traffic along these avenues. 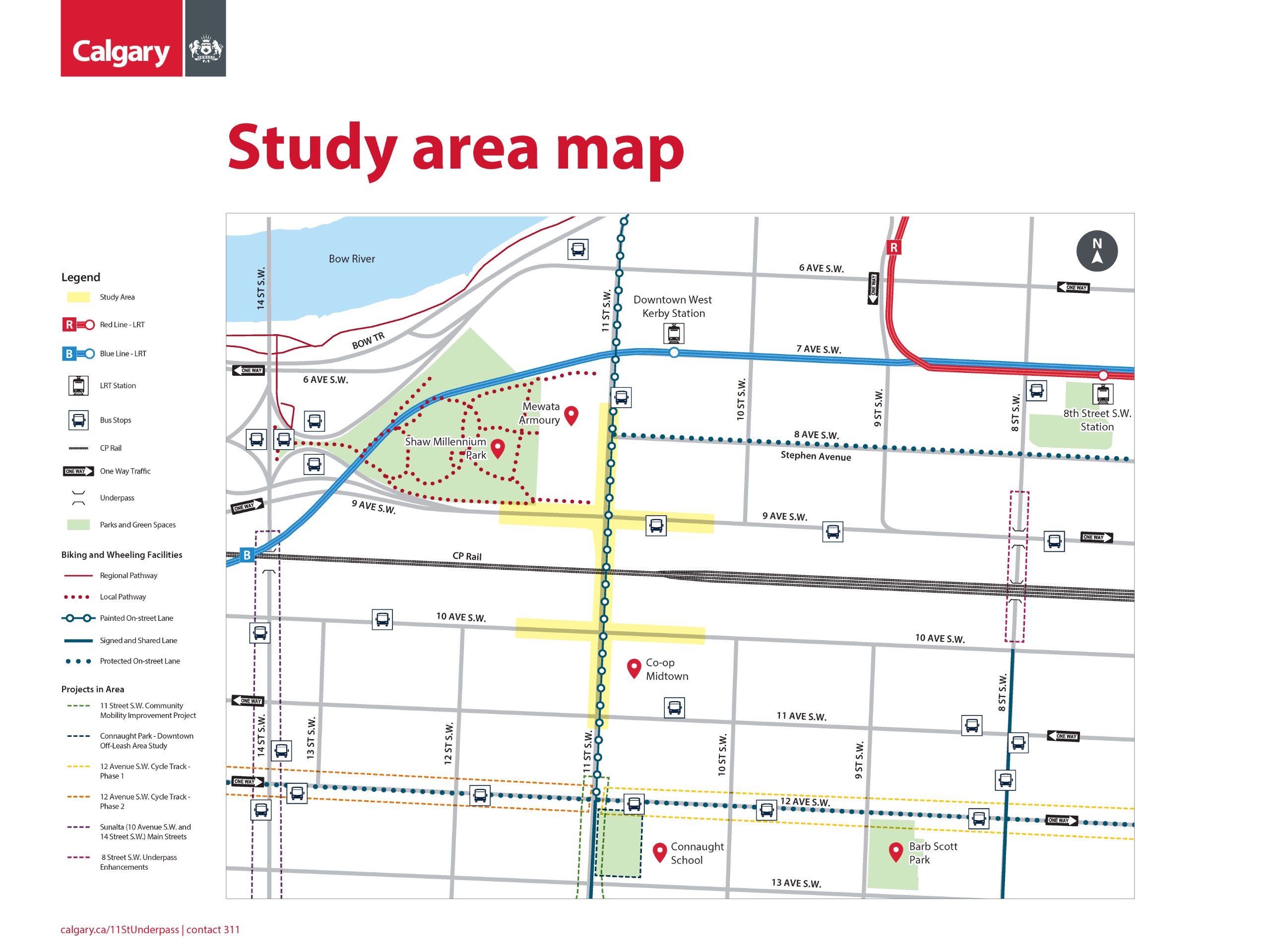 The Beltline is a neighbourhood with over 25,000 residents. Unfortunately, much of the transportation planning from the last 50 years was designed to move as many cars as quickly as possible in and out of the Downtown Core with no regard for surrounding neighbourhoods like the Beltline. The plan for the 11 Street active modes underpass will help to reduce cut-through commuter traffic through the Beltline’s residential neighbourhood streets. 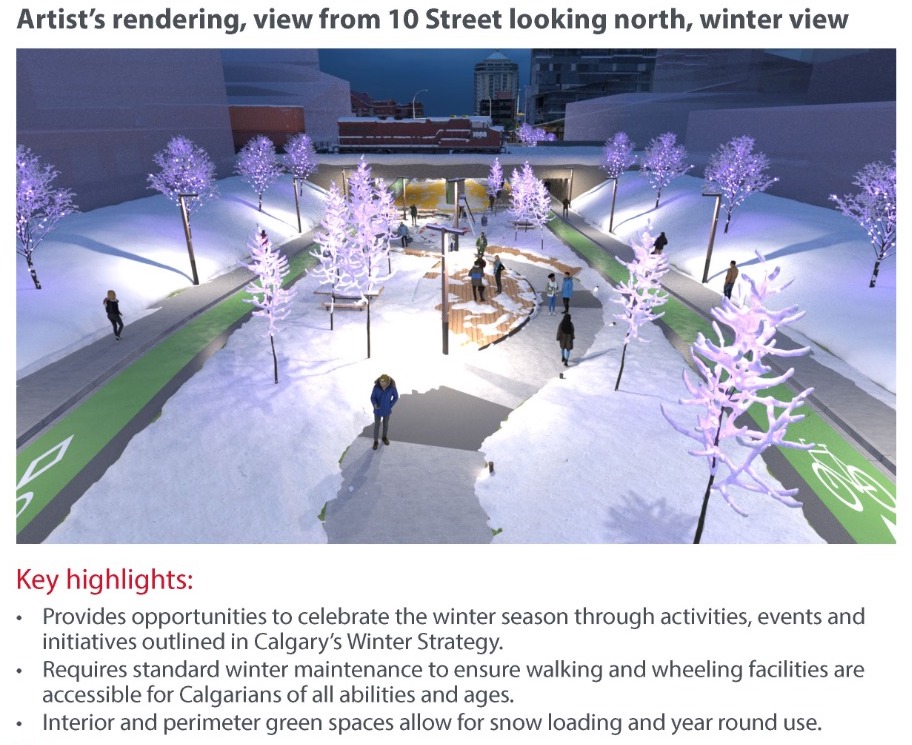 Hundreds of children attend Connaught Elementary School on 11 Street and 12th Avenue in the Beltline, unfortunately, commuter traffic can make this journey treacherous for neighbourhood children walking to school. The 11 Street active modes underpass would remove the unsafe rail crossing from this trip and even introduce a new playground along the way! 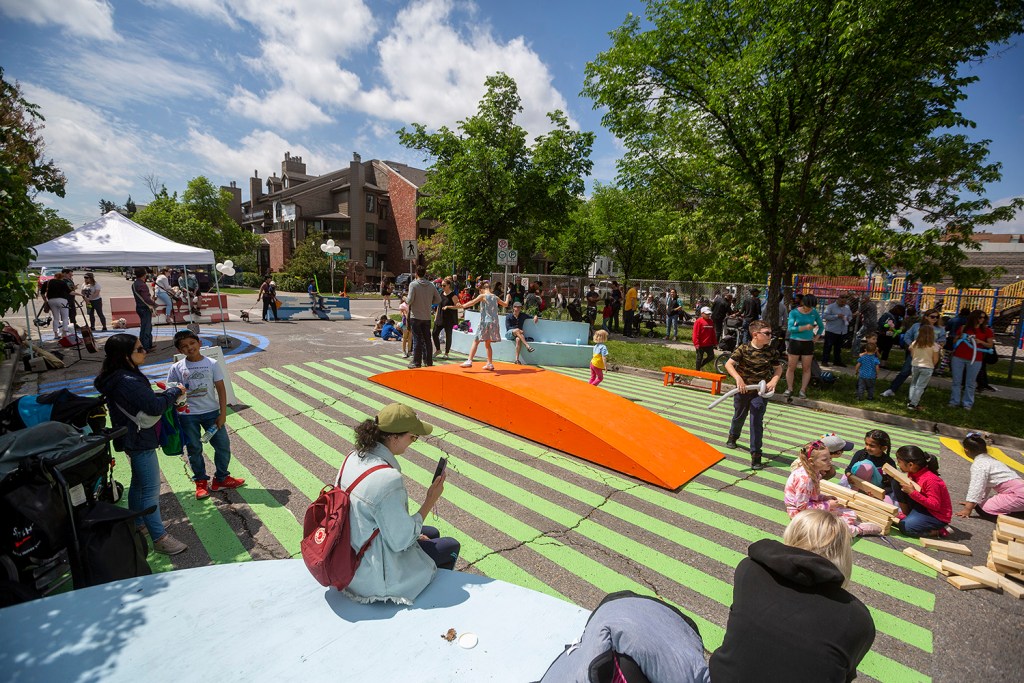 The 11 Street active modes underpass plan would cost only half the price of an underpass for cars due to the reduced depth that would be required to dig under the CPR tracks. The last CPR underpass that was built Downtown at 4 Street SE cost $70-million. This would amount to a major cost savings for Calgary taxpayers and would mean that this project (and others) could be funded sooner. 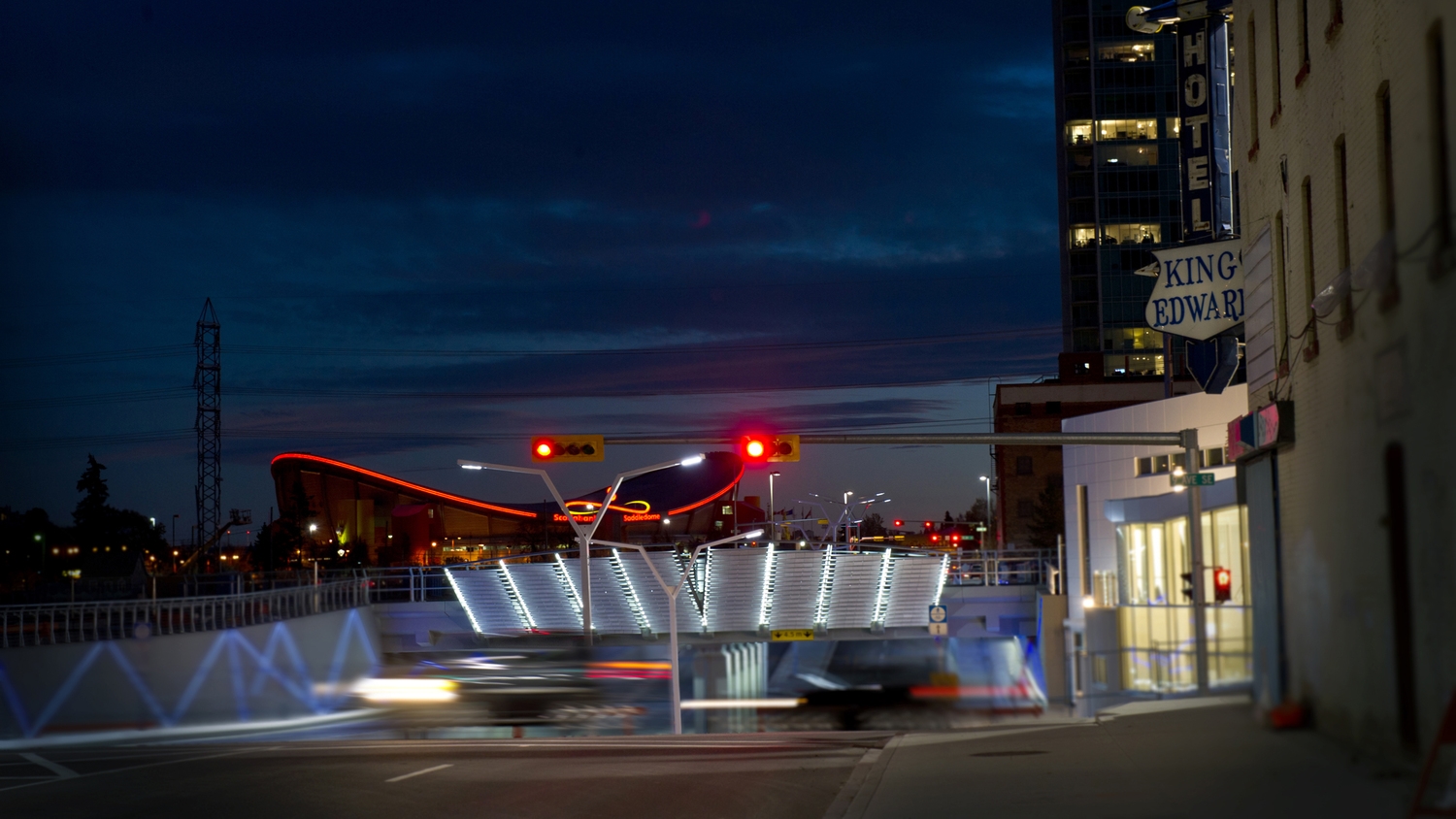 The 4 Street SE underpass cost $70-million to build and largely serves as a car sewer for vehicles speeding in and out of the Downtown. At half the price, the 11 Street St underpass is more likely to be built sooner than another vehicle oriented underpass.

REASON #11: A new destination for all of Calgary

Much like the Peace Bridge, Stephen Avenue, High Park, and Fly Over Park we know we can transform neighbourhoods with unique and inviting spaces designed for people. West Beltline and Downtown West have undergone immense growth in density over the last decade and it’s time the City reinvest in supporting this growth by building exciting new public spaces for local residents, businesses and all Calgarians. 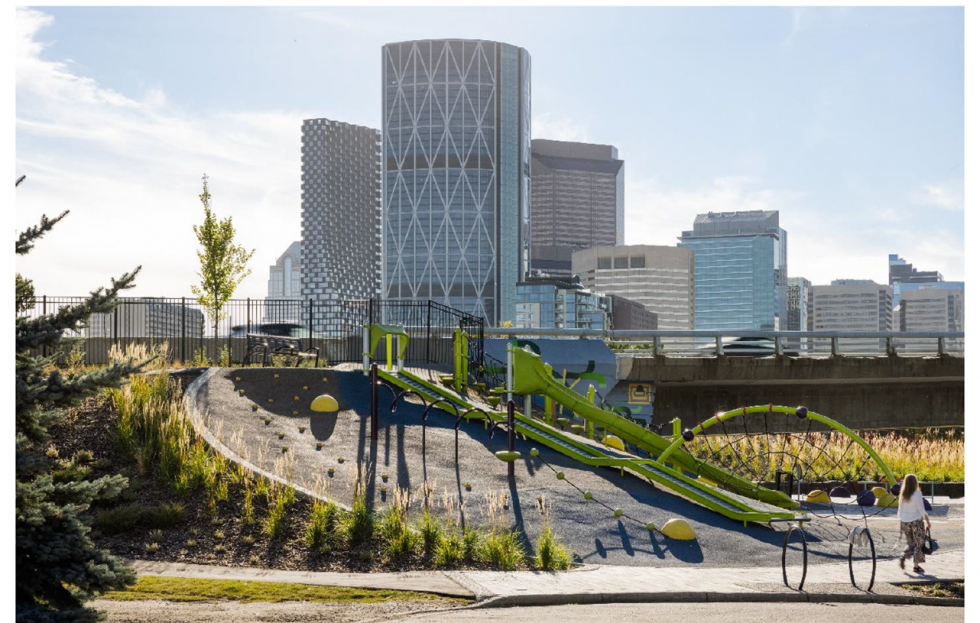 Flyover Park in Bridgeland is the latest example of transforming underutilized public space to make attractive destinations for people.

Learn more and provide your input

Visit the City of Calgary 11 Street Underpass Engage website for more info and to provide your feedback and support.