City Council Must Make Good on the Green Line

The Green Line is a visionary project

The Beltline Neighbourhoods Association is pleased to have had an opportunity to collaborate with the City of Calgary’s Green Line team as a stakeholder over the past several years. Through our Beltline Urban Development Committee (BUDC), we have had a chance to share our insights and the perspectives of the community on numerous occasions though a variety of mediums including public open houses, workshops, and participation in public hearings of Calgary City Council and its standing policy committees.

As a community, we are excited about the Green Line’s huge potential to bring about meaningful change to the Beltline through connectivity and investment in our civic infrastructure. Visionary projects on the scale of the Green Line constitute a rare opportunity to make a significant difference to our City and the importance of making the right decisions to arrive at the best outcomes for all Calgarians is not lost on us. While undoubtedly the most challenging segment, we also view the portion of the alignment that passes through Centre City to be of critical importance. Ultimately, we believe that getting the Beltline and Downtown sections right is fundamental to ensuring the success of the entire system.

Challenges through Downtown can be solved

The Green Line alignment previously approved by City Council in June 2017 included a bored tunnel from 16 Avenue North to East Victoria Park along 12 Avenue South with an underground transition to 10 Avenue SE and portal to a surface station at 4 Street SE adjacent to the CPR right-of-way. As of Summer 2019, we understand the Downtown and Beltline alignments are being re-evaluated for the following reasons:

New opportunities to do better

Recognizing these significant challenges associated with the alignment adopted by Council, we have supported the Green Line Project Team’s revisiting this alignment, especially in light of new developments in East Victoria Park, including:

Given the challenges and opportunities identified above, we believe there is significant benefit in considering a full 12 Avenue South cut-and-cover alignment with underground stations at 1 Street SW and 4 Street SE integrated with the new arena and BMO Expansion projects. Cut-and-cover is a lower risk and lower cost construction option to build the Green Line below street level that was not possible in conjunction with the previous alignment that tunneled under the Bow River. This alignment would maximize the following benefits and opportunities: 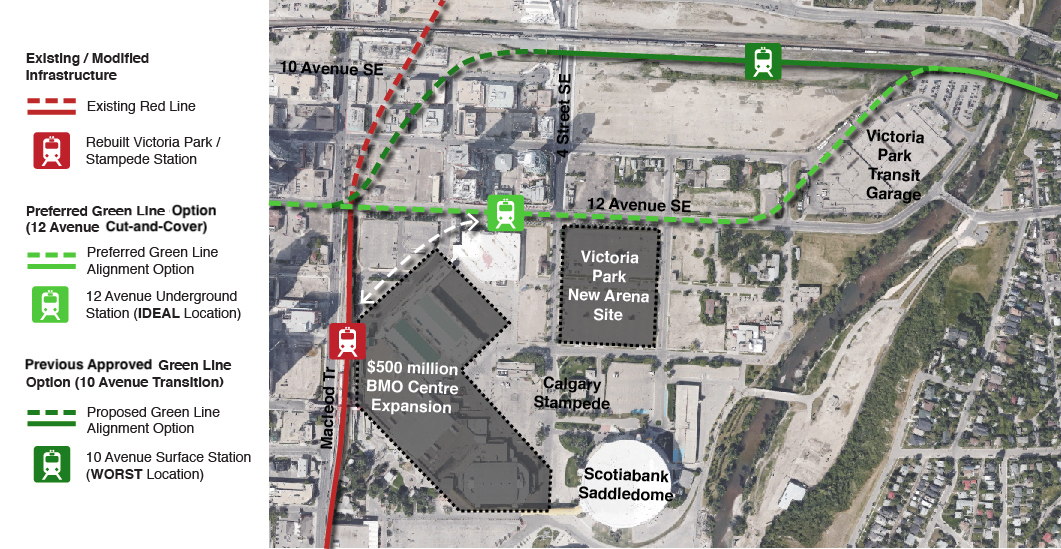 Don’t be fooled by calls to hack and slash

We understand that the Green Line Team and City Council are now evaluating a number of alternative alignment options including fully at-grade alignment along 12 Avenue SW, potential 10 Avenue SW alignments, and a range of other scenarios including removing the connection between the north-central and southeast portions of the line altogether or even running up Nose Creek alongside Deerfoot. While the BNA understands there are many practical and technical obstacles to overcome while managing budget considerations, the implementation of a system such as this, involving such significant public investment, requires that the long-term interests of the community, and by extension the entire city be considered holistically before making such a recommendation.

The Beltline is an integral part of the lives of most Calgarians, and home to 25,000 people and the second highest concentration of offices in the city – who contribute significantly to the City’s property tax revenues. We think it is essential that the Green Line development be considered thoughtfully everywhere in the city and would argue that how it travels through and engages with the Beltline will be key to its success or failure.

The thread that can weave it all together

In light of the exciting new developments since 2017 in East Victoria Park (new arena, BMO Centre Expansion, new Victoria Park Red Line Station) and the challenges encountered with the 2017 bored-tunnel underground alignment, we strongly encourage the Green Line Project Team and City Council to fully consider a 12 Avenue South cut-and-cover underground alignment through the Beltline that weaves together the above new city-shaping investments and delivers positive wide-reaching economic and transportation benefits in Calgary for decades to come.