The City of Calgary has released the final results of Phase II public engagement for safety and mobility improvements on 14th and 15th Avenues SW in the Beltline. The results show overwhelming support from residents, local businesses and developers for adding a protected mobility/cycle track on 15th Avenue with added safety improvements to both 14th and 15th Avenues including curb extensions, crosswalks and improved signage. 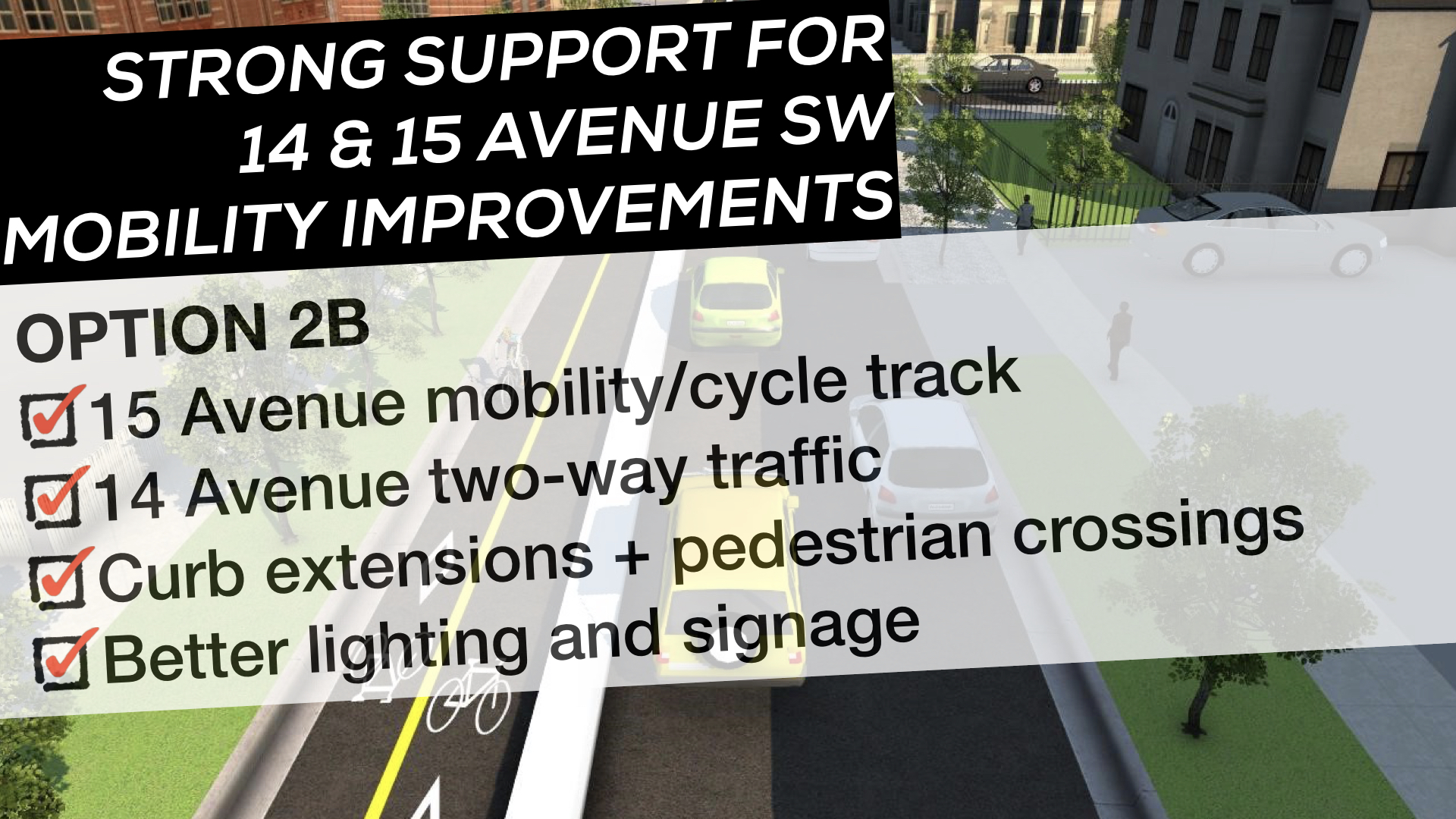 Phase II public engagement received over 600 responses with overwhelming support for Option 2B with a protected mobility/cycle track on 15 Avenue, two-way traffic on 14 Avenue and improvements to intersections, pedestrian crossings, and lighting on both avenues. 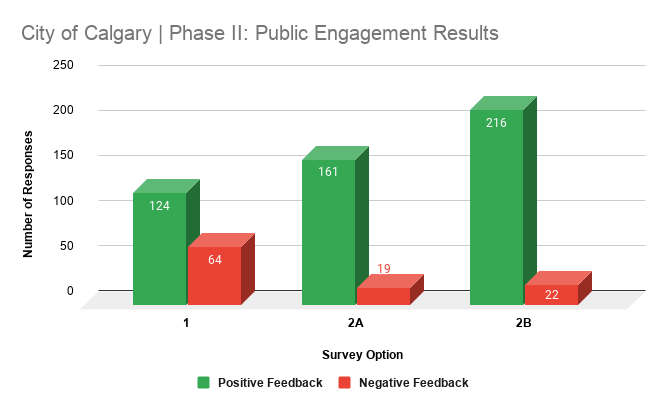 City of Calgary Phase II public engagement results for each of the three options presented.

In addition to the strong support for Option 2B in the City of Calgary Phase II stakeholder engagement survey, more than 30 letters of support for option 2B were received from prominent local businesses, developers and organizations in the Beltline. 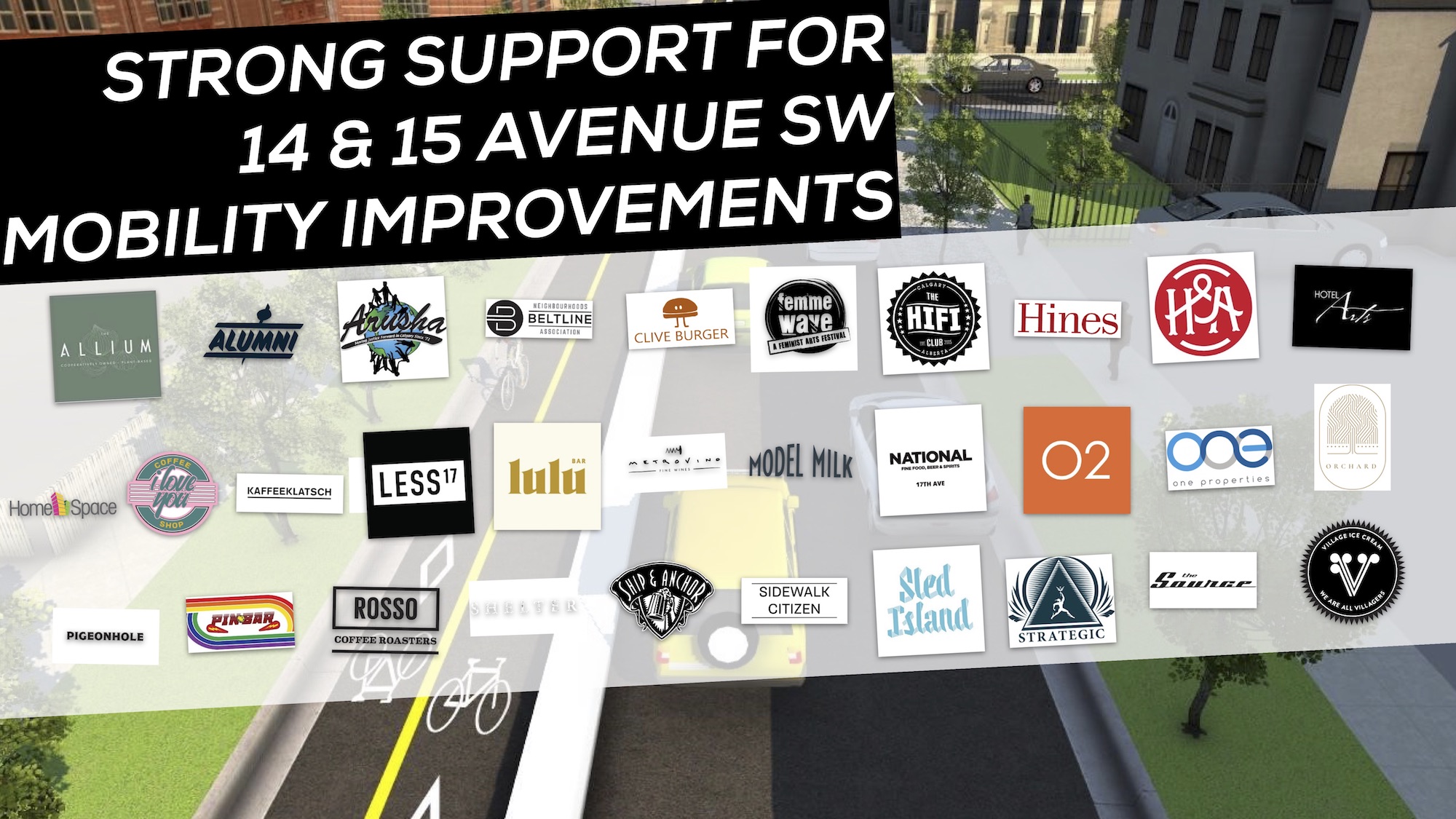 The City received letters of support for Option 2B from more than 30 local businesses and developers located across the Beltline.

Letters of Support for Option 2B from Local Businesses, Developers and Organizations

In September 2020, the City of Calgary conducted public engagement throughout the Beltline on the future of 14 and 15 Avenue one-ways that asked citizens to identify what was working, existing challenges, and ideas for improvements. The City received over 500 contributions of feedback demonstrating an overall strong desire for a protected mobility/cycle track, improved safety, pedestrian crossings, curb extensions and more. A summary of the results of the engagement can be found here.

Thank you to all the residents and local businesses that took the time to participate in the City's public engagement sessions and provide thoughtful feedback on improving the safety and mobility of these streets in our neighbourhood. The Beltline Neighbourhoods Association has long advocated for improvements along 14th and 15th Avenue starting back in with the beginning of 17th Avenue reconstruction in 2017 and again after the project wrapped up in August 2020.

The feedback heard in Phase I and Phase II engagement, along with The City of Calgary's technical analysis, will be used to develop a recommendation for the configurations of 14th & 15th Avenues South. The recommended option will be further refined and improved as the City moves towards development of a detailed design.

Once complete, the City will share the final design with the public expected later in 2021-2022. You can watch for updates here.