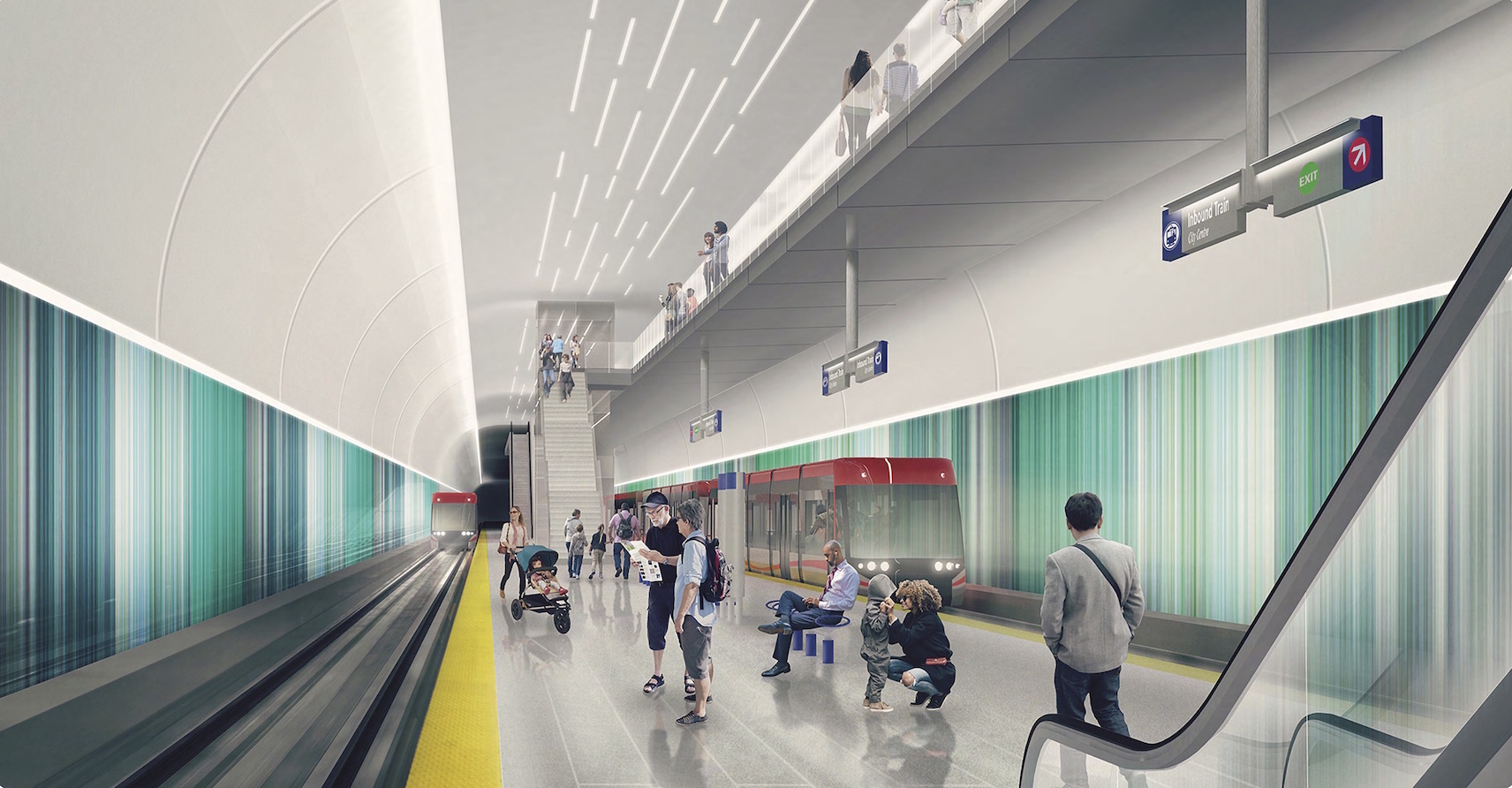 The Green Line LRT presents an exciting opportunity to make Calgary’s most dense and urban neighbourhoods better serviced by public transit. The best option for the Beltline comes down to the accessibility of the Green Line to all the people, businesses and important places in the Beltline, and the positive integration with existing travel modes in what is already a challenging environment for mobility.

The Beltline Neighbourhoods Association is deeply concerned that 12 Avenue underground is being prematurely removed as an option and is asking the City to continue to investigate this potential alignment.

What Is the Green Line?

The Green Line is an upcoming LRT line that is intended to connect Calgary’s northern communities through the Downtown and the Beltline to Calgary’s southeast communities, spanning from 96 Ave North to as far as the new South Health Campus. Currently, the project is in the planning and engagement phases with final recommendations to Council expected in June 2017 and construction to begin within the next 5 years. 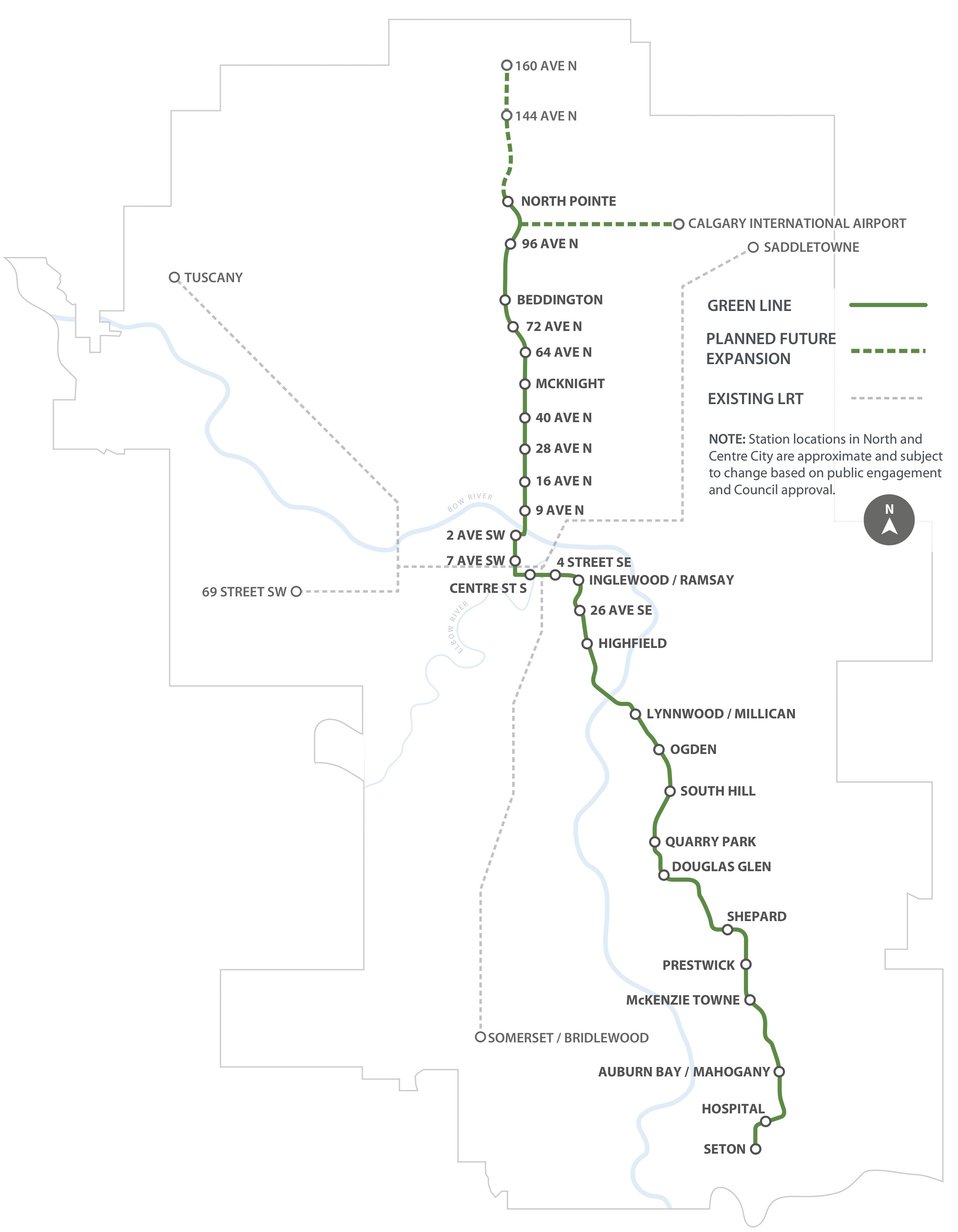 Alignment Options Through The Beltline

The City initially proposed eight options for the Beltline travelling from 2 Street SW, across the Elbow River, and into Ramsay:

Two station locations have been proposed for the Beltline at Centre Street and 4 Street SE.

The best option for the Beltline comes down to the accessibility of the Green Line to all the people, businesses and important places in the community, and the positive integration with existing travel modes in what is already a challenging environment for mobility.

A 10 Avenue alignment would essentially bypass the Beltline along its northern periphery and be the furthest possible distance from the majority of Beltline residents and destinations. It is also just two blocks away from the planned future realignment of the Red Line under 8 Avenue S, which will have overlapping catchment and diminish the benefit of a new LRT line. In terms of accessibility, 10 Avenue is the least desirable alignment corridor and squanders the great potential for the Green Line in the Beltline.

An alignment through the heart of the Beltline on 12 Avenue would most effectively serve the 10/11/12 Avenue corridor while providing the greatest proximity to the majority of the over 22,000 residents and the major destinations that all lie to the south. This alignment corridor has the potential for the highest ridership and greatest benefit to the Beltline and all Calgary Transit passengers.

12 Avenue alignment would also allow for a critical transfer/connection point to be accommodated at the intersection of the Red Line and the Green Line on the north end of Stampede. By contrast, a 10 Avenue alignment would require passengers transferring between the two lines to walk almost 1km between the Victoria Park/Stampede station (Red Line) and the 4 St SE station (Green Line).

The Beltline is serving an important role in leading Calgary's push towards more economically sustainable growth through greater density, diverse land use and viable transportation options. To this end, the City should be focusing on how accessible we make the Green Line through the Beltline, not how efficiently we can bypass it.

REASON #2 - Best Integration With Other Transportation Modes: To Disrupt or Not to Disrupt?

The Beltline and the Downtown have the highest traffic densities in the entire city. In addition to the 22,000 residents, thousands of businesses and major destinations, the Beltline also serves as an important corridor into the Downtown, Calgary’s economic engine.

The Green Line is being designed for train lengths of up to five present-day LRT cars. A surface crossing of the Green Line on 10 Avenue or 12 Avenue would significantly impact vehicle, bicycle and pedestrian traffic east/west flows as well as major intersecting north/south streets: 2 Street SW, 1 Street SW, Centre St S and Macleod Trail North and South.

Adding up even just the vehicular traffic volume that would be impacted on these streets we see comparable traffic volumes along the 2 Street SW route and intersecting avenues the Green Line will be traversing Downtown, where administration is already recommending the underground option to avoid disruption.

There has also been considerable opposition to the disruption of traffic into the Downtown that would be caused by running the Green Line down the Centre Street Bridge, which by comparison serves only half the traffic volume as Macleod Trail North/South through the Beltline into Downtown. By this measure, running the Green Line at surface across Macleod Trail North/South through the Beltline would have double the potential disruption.

Surface level alignment through the densely travelled Beltline would also come at a price of reduced speed and reliability for the entire Green Line. Service disruptions would be more frequent leaving commuters stranded on a more regular basis.

What Happened to the Best Option?

This week, administration is proposing a shortlist of three options for the Beltline alignment to the Transportation and Transit Committee:

The Beltline Neighbourhoods Association is deeply concerned that 12 Avenue underground has been prematurely removed as an option. This would leave the Beltline with the remaining options of either being effectively bypassed and/or greatly disrupted and bisected by the Green Line with significantly reduced mobility into Downtown for all Calgarians.

Let’s Get 12 Avenue Underground Back On the Table!

The Beltline Neighbourhoods Association will be asking the Transportation and Transit Committee to direct administration to continue to investigate the alignment option of 12 Avenue underground as a planning option that is in the best interest of the Beltline, Calgary’s economic engine in the Downtown and for the entire Green Line project.

Important questions we believe need to be answered:

1) The current design does not show a connection station at the intersection between the Red Line and the Green Line at the north end of the Stampede. Why is this not being considered and what does this mean for people accessing the Stampede, Saddledome and Convention Centre from the southeast end of the Green Line?

2) Has the proximity of the adjacent Red Line on 7 Ave (which is planned to be moved under 8 Avenue in the future) been factored into the consideration of the Beltline alignment options along 10 Avenue given the redundant/overlapping catchment areas?

3) With near/medium term plans to relocate the Calgary Transit East Victoria Park bus garage, has the project team investigated the potential to accelerate this relocation for a better long term alignment through Victoria Park?

4) How do the Beltline alignment options fit within future Stampede and Victoria Park redevelopment plans?